After some initial brainstorming and sketching to gather up ideas for antiGravity Turtle's first game, I decided it was time to start prototyping gameplay. After all, before I start trying to make things pretty, I'd like to have some sense that the game will be fun.

Being that my goal is to create a third person perspective game, some kind of stand-in character to interact with the prototyped game worlds is an important detail, so much so that a simple controllable character felt like a necessary first step to me before I start anything else. In the past I've tried just a simple shapes or a static biped mesh for a stand-in character, but I wanted to push my stand-in character a little further with a basic rig and a couple of simple animations. I have grand aspirations for the character's movements and animations later on, but for now, a simple idle and walk and run cycles will do. 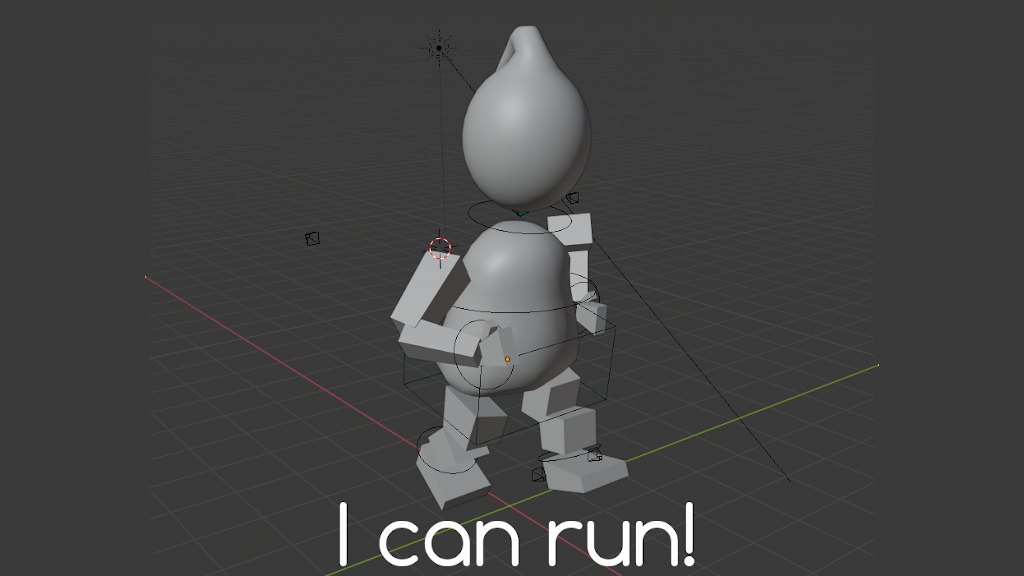 Using Blender, I modeled a basic character model with discreet meshes for each body part in a t-pose with the same proportions I have in mind for my final character, with the hope that some of the work from this prototype character will be a jumping off point when I return to the character to flesh it out further. Next, I set up joints to make up the skeleton, attach the skeleton to the mesh, and paint the weights on the meshes so that they deform as intended along with the joints. The weight painting process and be fairly tedious in some circumstances, but luckily at this stage, I can just flood the influence for a single joint to a single mesh (forearm mesh to forearm joint for example).

Next up, controllers for the joints to make the animation process easier. I set up IK chains for the arms and legs with wireframe objects to make joint selection and IK chain control easier.

With all of the setup done, I was able to keyframe my controller objects and create simple idle, walk, and run loops and import the resulting animated character into the Godot game engine!

By the way, reading through the Blender manual section on Animation and Rigging is extremely helpful for learning this process!

Something about moving from brainstorming notes and sketches to a moving three-dimensional character, even a simple stand-in one, starts to bring the game to life for me.